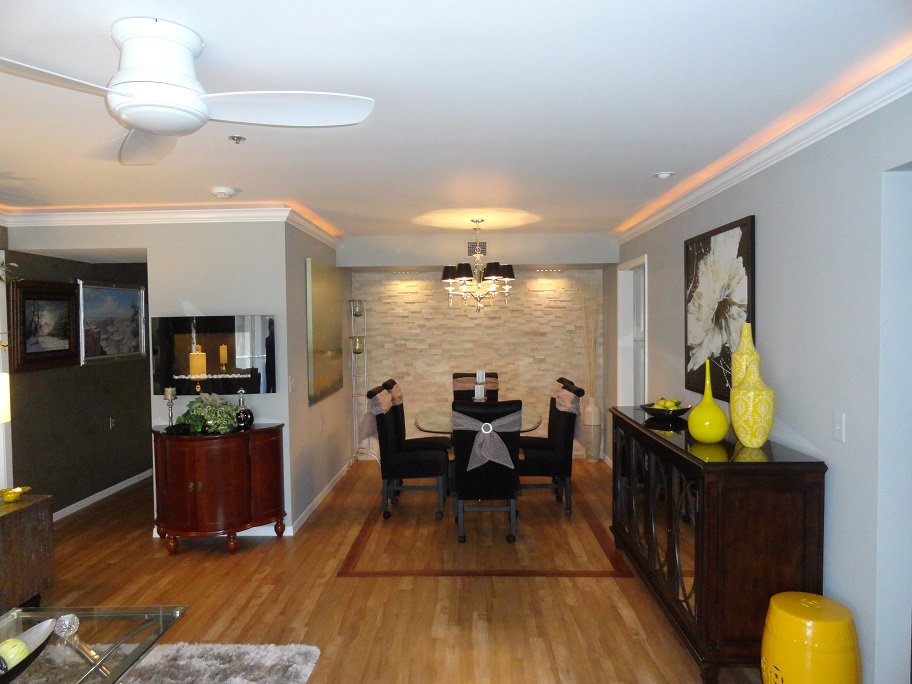 Your home has always been a reflection of your personality, hobbies, and passions. At Royal Oaks, your home is no different! Once you’ve made the decision to call Royal Oaks “home,” the fun of customization begins. From adding in a faux window, to changing paint colors, to installing stone walls or extending kitchens, whatever your needs are, our team is ready to accommodate. Below are some examples of home customizations that provided residents with uniquely personal space.

Fit for an Interior Designer

When Barb and Bob left their large, custom home in Sun City to move to Royal Oaks five years ago, they were ready to downsize but still wanted their home on our campus to reflect Barb’s unique decorating taste. Barb’s interior design ability was legendary among her friends and she really enjoyed making her own homes unique and helping friends do the same. After choosing the Mimosa apartment, she went to town and worked with the Royal Oaks refurbishing team and some outside contractors to bring her vision to life.

The results? 1204 sq. ft. of grandeur, including faux painting, a stone wall, picture-framed wood floors, recessed electric fireplace, and a “hidden” closet masked as a bookcase, and even subtly lit crown molding to make the ceiling appear higher. A laundry nook turned into a beautiful desk space, and the galley kitchen came alive with track lighting, a faux window, and silver and white cabinets flanked by stainless appliances. Superb entertainers, Barb and Bob joined a progressive dinner group here and the participants savor Barb’s culinary skills.

Karen and Irwin’s first move onto our campus was in the delightful Laurel apartment, where Karen turned the laundry room into her art studio. It worked well, but Karen craved natural light in her studio to create her paintings. On their initial tours, this active couple had pinpointed a certain Mimosa apartment in a location with a lot of light. Hoping it would eventually be available, they moved into the Laurel, and became first on our wait list for the apartment of their choice. As luck would have it, that Mimosa apartment became theirs a couple of years later!

Karen asked us to reconfigure the very large master bedroom so she could have a private art studio flooded with the morning light. Our refurbishing team not only figured out how to accomplish that, but suggested another modification that kept the bedroom light and airy, too. Karen’s artistic ability shines throughout the home, not only in the artwork that hangs throughout but in the cool colors of teal and grey they chose for the décor.

An epiphany becomes a reality

This past spring, Marketing Director Vicki Ullery was standing in one of our garden homes that needed to be completely refurbished when she had an epiphany on how to create a living/dining/kitchen open floor plan, doing away with the enclosed galley kitchen. Hoping the existing plumbing would allow this to be accomplished, she excitedly called Bill, the Facilities Manager. Walls had to be moved, the kitchen appliances and sink had to be relocated and a drawer microwave had to be installed rather than an over-the-range microwave. While they were working in that home, the refurbishing team suggested opening up the front door entry, creating a spacious and visually interesting greeting point. When a visitor from California who was contemplating moving to our campus saw the modern floor plan, that Palmetto garden home was snapped up in a flash. We only wish we had taken “before” and “after” photos!

Sheila has a pie passion. After living in the Mesquite apartment for a few years, she told husband John that she needed more kitchen space to bake her pies. He thought she was kidding but she wasn’t! They extended the kitchen cabinetry into the dining space, creating another 10 feet of counter space for Sheila to make her sweets. We’re glad they did because Sheila is a good pie sharer! Several other residents in the Mesquite and Holly floor plans (similar kitchens) have followed Sheila’s idea and extended their kitchens. Imitation is the sincerest form of flattery!

Patty, originally with roots in Hawaii, loves color. Her apartment beams with hues from the islands—seven different ones in all. You can’t help but smile when you enter her home.

Moving to a community like Royal Oaks may mean downsizing from your current home, but it also means creating a space that is uniquely you. Lighting and paint in particular can turn a ho-hum room into one with character and charm. Let us create your new abode at Royal Oaks! One of our 23 floor plans is sure to fit your bill. Call 623-815-4132 to arrange a tour. Maybe Sheila will even bake you a pie!