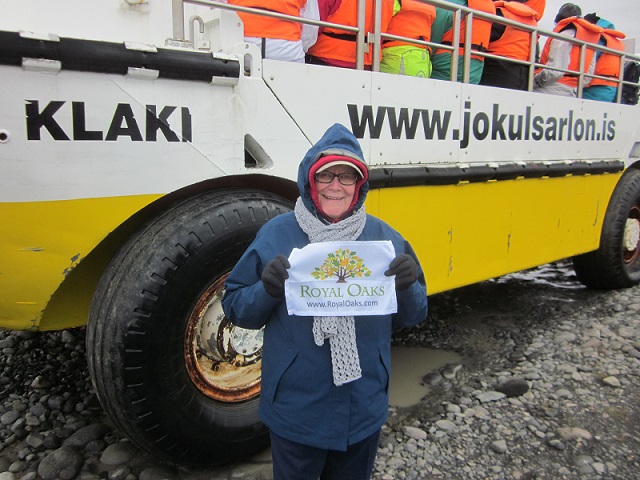 Living on a campus like ours frees you from the burdens of home ownership, allowing you time to indulge in travel passion. Just lock the door, let our security team know when you’ll be returning, and off you go. We hope you send us an email or two to make us jealous or allow us to follow your travelogue on your Facebook page!

After retiring more than 25 years ago, Barry Leavitt and Cindy Grossman made their RV their home, tooling around the country to see whatever inspired them. Their Wisteria apartment at Royal Oaks is their second home, providing the security of Lifecare, but the open road is their true passion, evidenced by this tidbit about their wanderlust. Having lived in an RV most of their married life, the size of the Wisteria fits them just fine. (links to here:

When not camping on a glacier in Alaska while keeping an eye out for a predatory polar bear, Karen and John Shane can often be found exploring the Wild, Wild West by auto. Their travels have taken them all over the world and now they are content to explore a bit closer to home. Having lived at Royal Oaks for five years now, they continue a robust, albeit less aggressive, lifestyle, using their Wisteria apartment as their home base for auto trips, enjoying some of those grand, historic venues they missed when they were sailing in England or camping in South Africa. They’ve snapped photos this year at the Hotel Del on Coronado Island, the Grand Canyon’s El Tovar Lodge, and the cabins on Mormon Row in Teton National Park. Karen explains why “it’s the lifestyle” that drew them to Royal Oaks.

On Helen Slemons’ 85th birthday party, her three daughters and one son presented her with a gift of a lifetime: A journey with the extended family to the Camino de Santiago in Spain. “The two best gifts were that they could do it AND they wanted to do it,” said Helen. The Camino de Santiago or the Way of St. James is a spiritual journey that people of all faiths and backgrounds have traversed for over a thousand years. The entire route covers about 500 miles and winds through idyllic northern Spanish countryside. Most people experiencing the Way of St. James walk 1215 miles a day to reach the next town for the night. At this pace, if starting at the beginning, a person can reach the Cathedral de Santiago in 68 weeks to attend the Pilgrim’s Mass held at noon each day. Thousands of people of all ages take this journey each year, immersing themselves in the local food, culture, and history dedicated to this experience. Helen’s family group ranged from 85 years old (Helen!) to her 22-year-old granddaughter, Lizzie.

Fred and Sherri Yates were lucky enough to live in a small village in France – Pierac, for two years in the 90s when Fred was asked to continue his career with Honeywell there. Recently, they returned to Royal Oaks from revisiting that small village  a trip where they also spent 16 days in Ireland, a week in England, five days in Normandy, and a week in Provence. Gone for two months, they were able to re-connect with French friends, meet delightful people at a “hobby winery,” (Sherri’s highlight) visit historical sites (Fred’s highlight), and the best part was they brought back some French wine to share with the staff at Royal Oaks! Read more about their trip and see some photos.

“Flagger” made the rounds

Two years ago, we armed residents with “Flagger,” a Royal Oaks-logoed banner and asked them to take photos when they were traveling and send them back to us.  See where Flagger landed--he even got to the moon!

Brigadier General Dave Woellner earned his pilot wings nearly 75 years ago, as the U.S. was training young men during World War II. Now, at the age of 96, he had a burning desire to go back up in the air just one more time. And he did!

Some people travel a little differently, like Chuck Benhke, who preferred a parachute as his mode of transport.

And for those whose traveling days are behind them but still have the wanderlust can “hit the road” through our travel virtual reality headsets, allowing them to swim the dolphins, visit hometowns, and even scale the Himalayas.

Whether your bucket list includes getting up-close-and-personal with penguins, like Carol and Ken Pierick did in Antarctica, or teaching English to blind hospitality workers in Vietnam, like Judi Didcoct has done, living at Royal Oaks makes it easy to jump on a plane, sail the ocean blue, or even ride your motorcycle in Canada, like Kitty and Roger Yadro. We’re happy to arrange an introduction to any of these traveling fools during your tour—and Roger may even take you for a spin! Call 623-815-4132.