It's the Lifestyle, by Karen Shane, Royal Oaks Resident 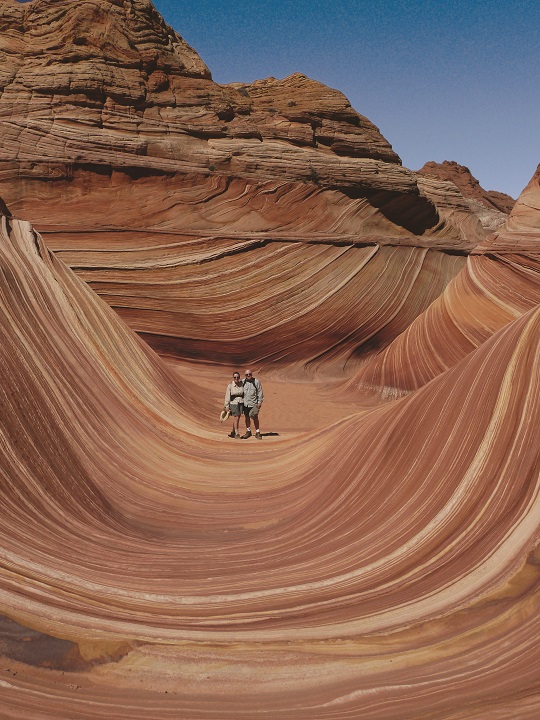 John and Karen Shane may have spent more time away from Royal Oaks than they have living here since they became residents in 2011. After their early retirement, their mission was to explore the world, but they realized they needed and wanted a home base. After thoroughly researching options, their cozy apartment at Royal Oaks became their sanctuary when these road warriors needed some down time off the road. Karen always says, “It’s the lifestyle here we cherish.” A writer by trade, find out how Karen and John realized Royal Oaks was the perfect complement to their rolling stone lifestyle  in her own words.

From our marriage on the plains of Nebraska 59 years ago at 18, John and I have led a peripatetic lifestyle, one that we were not inclined to readily abandon. While others were busy rearing young ones, we were:

All enriching life experiences, whether or not enhanced from the reassurance of rosy retrospection.

But it was after we retired in 1994 from Sandia National Laboratories in Albuquerque that we honed our adventures into a treasured lifestyle. We always knew that our home was wherever we were together. It was in retirement that we began our “on the road” odyssey that we were privileged to live for two decades.

John acknowledged he had the attention span of a gnat. He told folks that because we could only afford one toy at a time, whenever we moved on to a new adventure, we reluctantly sold our previous home base.

First, a boat then an Airstream, then onto South Africa

No experience was more challenging, demanding, and rewarding than our 42-foot Kadey-Krogen trawler that we purchased as our first “on the road” lifestyle. There was something compelling for a couple of desert rats to be able to watch the range markers off the Georgia coast come into alignment for the first time as we motored the Intracoastal Waterway.

After deciding that the scenery didn’t change much on the water, a year later we followed up our boat with a 34-foot Airstream travel trailer, pulled by our 350-horsepower, four-wheel-drive one-ton Dodge dually diesel. We moved from Nova Scotia to the Yucatán with the seasons, ever chasing the 80-degree temperature belt. OK, so we and fellow Airstreamers were in our rigs on flatcars on that runaway train on a tour of Mexico’s Copper Canyon.

We took time out to explore South Africa for six weeks in a “deluxe” 20-foot camper van with righthand drive for their left-side roads and a four-speed column that John shifted with his left hand.

But by spring of 1999, we had relocated to England to live on our 20-ton, 6-foot-10-inch by 57-foot narrowboat plying the more than 2,000 miles of canals on a transportation system that had presaged the Industrial Revolution, transporting everything from salt, slate, and cider, to Josiah Wedgewood’s precious pottery. The excitement included the time our hydraulic steering broke on our narrowboat on the River Thames in the midst of an international conference on naval weapons systems complete with a flotilla of warships. We lived aboard our narrowboat for more than two years before we headed back across the pond.

Our next adventure was a 34-foot Foretravel motorcoach with a Jeep Cherokee for our tow car. In response to questions about whether we didn’t get tired of being on the road all the time, I always asked, “What’s not to like?” We woke up in a different spot every morning with new adventures and explorations waiting.

John had the vision and expertise to produce a way of life for us that would allow us not just to simply co-exist under the same roof but to truly share a lifestyle, an “on the road” lifestyle where there was neither room nor time for restlessness, repetition, and restrictions. With each new adventure we had the confidence to know we indeed could do whatever we set out to do.

When did Senior Living enter the picture?

Our senior living decision fate was set in 1996, when traveling in our Airstream, we happened upon another couple in theirs at an RV park in Alpine, Texas. We invited them to join us for a lasagna dinner  complete with pasta from scratch. Later, they asked what we planned to do if we became incapacitated.

“We’ll take care of each other.” She promptly disabused us of that faulty thinking when she asked, “Now, just how is that going to work?” Hmmm. Although we could not offer a response, at only two years into retirement we weren’t ready to consider anything else. We refused to confront the issue head on.

Years later, we again enjoyed yet another coincidental meeting with them in an RV park in Richfield, Utah. This time we all determined to exchange details and keep in touch. By now we were more receptive to the idea of a continuing care retirement community, or CCRC. Our friends had been familiar with the concept because her mother had resided in one. In fact, John had warmed to the idea to such an extent that on parting, he quipped, “If you find the right one, buy two!”

Fifteen years after our initial meeting, the four of us decided to check out CCRCs in the Greater Phoenix area where we all wintered. Because of their unchallenged reputation, Royal Oaks, a nonprofit in Sun City, was on our list from the beginning and indeed it was our final selection when we had completed marking off our checklist.

We all reasoned that financial soundness had to be the single top priority. Over the past three decades Royal Oaks has built a reputation for financial and management strength. That security and stability is reassuring for their residents’ future. Whether residents’ health or financial status changes, Royal Oaks will be here for us.

Secondary to solid financial credentials, our evaluation included of course health care, a proven management team, dining and social venues, classes and lectures. And finally, John and I saw this and other amenities all encompassed under the rubric of lifestyle, that elusive determiner that, although different for each of us, beckons us all.

In January 2018 an exciting new expansion, the beginning of the first seven years of a 20-year master plan was unveiled at Royal Oaks. Upon completion, the new 60-suite care center will complement our award-winning state-of-the-art memory care center as well as our prized fitness facility where dozens of classes from balance, chair yoga and osteoporosis exercises to popular, robust water volleyball games are offered.

A “big” small apartment was just the ticket

While our friends promptly moved in, we opted to simply secure an apartment, a small one (which even at that was more than twice the size of any of our “on the road” homes for the last two decades) that we promptly filled with everything from a Julia Child-type pegboard for my gourmet cooking to countless boxes, mostly books, from 20 years in storage. We even made up the bed, ready for an emergency landing if need be. We would hit the road and be back in 10 years. Aggressive prostate cancer brought us back in less than two. That bed was waiting.

But having been physically ensconced in Royal Oaks for six years now, we continue a robust, albeit less aggressive, lifestyle, using our apartment as our home base for auto trips. While we’re inclined to think it isn’t wise to attempt to return to perfection, now we are enjoying some of those grand, historic venues we had missed earlier, like the Hotel Del on Coronado Island, the Grand Canyon’s El Tovar Lodge, and the cabins on Mormon Row in Teton National Park.

The adventure continues. Less than five months after major surgery for John, the shadows were lengthening by the time we completed our 9-mile scrambling hike in the Little Wild Horse-Bell loop slot canyon in Utah. And last fall, at age 77, spur of the moment when we were driving west on I-70 in the Colorado Rockies, we decided to tackle Hanging Lake. This exquisite lake’s access trail had a 1,000-foot altitude gain in a single mile.

But a bigger obstacle was that this was not a trail where we could simply stride firmly forward. The entire length was a jumble of massive boulders that had to be negotiated. I declined John’s suggestion that we e-mail a photo of our athletic prowess to my orthopedic surgeon at Mayo Clinic who’d performed a hip replacement for me four years earlier.

We continue to be confident in our decision of Royal Oaks  and in fact it’s continually reinforced. Whether dining on our private balcony or having turnkey “on the road” departures, we’ve now graduated to “Why would we ever have wanted the hassles of a house?”

The residents’ refrain, “Aren’t we lucky to be here?” is genuine. It’s the lifestyle!