Jana DeWit: She really is about Planes, Trains and Automobiles or RVs 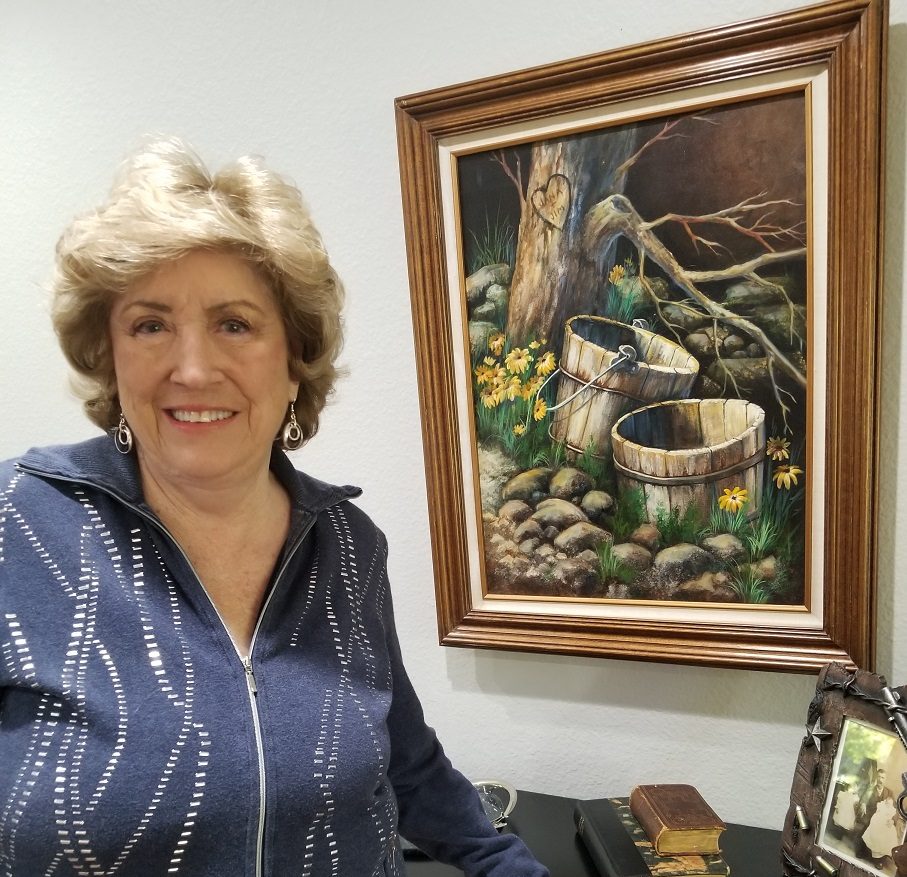 One of the best parts of my job as Marketing Director is to get to know residents well. Jana DeWit was carrying a model train box through our lobby in December. When I inquired about it, she told me about her 50-year passion for model trains and I thought, “What an interesting topic to share about a very interesting resident.” I knew she had been to the White House in 2018 for their Christmas party and that also seemed something fun to dig into. Halfway through interviewing her, this article about her passion for trains took a left turn and turned into this story about a delightful woman who relishes every second of life.

Jana grew up in Tulsa, OK. Her father married four times and because of circumstances, Jana and her sister were sent for stretches of time to a Children’s Home there. “I was there five times,” said Jana, “the last time for a year. It was an incredible experience. I went to a great public school near the place and had really a lovely upbringing there with lots of friends and activities. It wasn’t an orphanage or anything sad like that. It was like a big happy family—and I told my son recently that 65 years later, my life at Royal Oaks mirrors that experience. Happy people helping one another and creating independence.”

By the time Jana was 12, her father’s life had settled into a routine and she was back living at home. As a young adult and working as a Purchasing Agent for Extruded Plastics in Southern California, she met Jim DeWit and married him 7 ½ weeks later. Then a firefighter, Jim wanted to become a pilot, which he did at the age of 33. The two travelled extensively on Jim’s pilot benefits when they weren’t hitting the road in their RV. Jana’s father was an American Airlines employee and she says, “In 67 years, I’ve never paid for a flight and never checked a bag. I’ve learned to pack smart in a carry-on and head out for adventure as soon as we touch down.” The DeWits were married for 45 years until his unexpected death in 2009. “We had 45 hand-holding years together so I can’t complain.” Somewhere along the line, Jana took up oil painting from the photos she took during her travels and her lovely Mimosa apartment at Royal Oaks serves as her gallery. This photo not only shows one of her many paintings but a photo of her great grandmother and grandfather, George Washington Dickey, who wrote an autobiography about life as a western cowboy, “Thirty Years in the Saddle.” Every interaction with Jana bubbles up with some new and exciting information about her!

“I can’t even begin to tell you all the places I’ve been,” said Jana, “and all the friends I’ve met from those years. In April, I’ll be going on a cruise with 14 pilot wives. I’ve gotten involved with a group called Women Traveling Together and I’ll soon be going on my 10th trip with them. Twelve of us this year will help assemble one of the floats in the Rose Bowl parade. What an experience! I want to keep seeing everything I can for as long as I can.”

In December of 2018, Jana was a guest at the White House Christmas party. Her son, Jeff DeWit is the former Arizona State Treasurer and now serves as CFO of NASA. His “plus one” for the White House shindig was his mom, who shared pictures with us of the red Christmas trees.

Now in Arizona for 17 years, Jana says living at Royal Oaks for the past two years has put yet another exclamation mark on her already remarkable life. Where she heads next is anybody’s guess.

If you would like to meet extraordinary people like Jana, we invite you to schedule a visit here, have lunch or dinner with residents, and discover why thousands of people just like you have chosen to be spoiled here over the past 30+ years, call 623-815-4132 or visit www.royaloaks.com.