Let us introduce you to the Yates 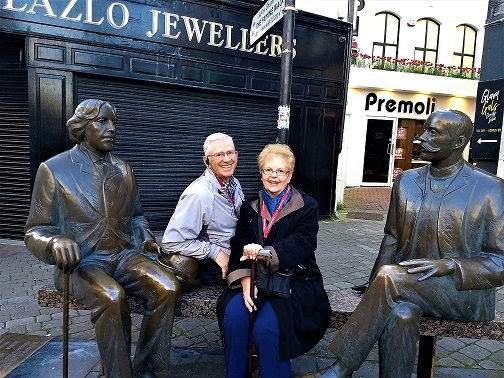 When a Navy man meets a demonstrator of organs, what happens? They fall in love, get married, build a life, move to France and now live at Royal Oaks!

Sherri and Fred Yates met north of Madison, Wisconsin at a small county fair. Sherri was demonstrating how to play the organ and Fred and his buddy began flirting with this pretty girl. The friend asked Sherri out but Fred caught her eye and off they went to a dance. The inevitable happened and after their wedding they found themselves living on a naval base in a Quonset hut in San Francisco. Fred shipped out to Viet Nam and following his tour of duty, The University of Tennessee in Knoxville became home while he got his Electrical Engineering degree. Fred studied and Sherri worked in a VA Outpatient Clinic. Then it was off to Cedar Rapids, Iowa where Fred designed flight control systems for aircrafts with Collins Radio.

Daughter Amanda arrived in 1973 and son Derick in 1975. By this time, the Yates were living in Phoenix where Fred had taken a job transfer with Sperry. Then craziness ensued. A sought-after expert in his field, Fred was recruited heavily and the family moved often for his job. In fact, one stint in Kansas had them buy a house and live in it for just one month! During this madness, Sherri managed to raise two children, add son Seth in 1982 and get her teaching degree!

In 1994, Honeywell (who had bought Sperry) asked Fred to head up a project in France with Airbus. They and Seth settled into a small village in Southern France (the two older children were in college and stayed in the states). It was here the travel bug for Europe caught them all. They explored much of Europe for fun and to trace the family ancestry. Sherri’s great-great-grandfather was a German composer and they located his home as well as the farm where her great-great-grandmother grew up. “It was thrilling to see these old records that the villages have kept, leading us to my lineage,” said Sherri. “It was an adventure to step on the soil where my ancestors raised their families and find that my last name was changed at Ellis Island!”

After two years, the family returned to Phoenix. Sherri settled into teaching 2nd grade and Fred continued climbing the ladder at Honeywell. He retired in 2003 and learned to cook, surprising Sherri when she got home from work with his gourmet creations. She retired in 2007 and they started mapping out places to explore.

Along with their children and grandchildren, many of whom live in the greater Phoenix area, they have managed to visit every state. They have crisscrossed Europe several times, visited the Netherlands, cruised through the Norwegian fjords and the Danube river, sailed from Quebec City to New York and enjoyed the Mexican Riviera. They took the family on their 50th wedding anniversary cruise to Alaska and continue to return to England and France when the opportunity arises.

Wanting to have more fun and less home maintenance, they moved into a Cholla Garden Home at Royal Oaks in the fall of 2015. “I was 71 and Sherri was a couple of years younger,” said Fred. “We were ready to let someone else take care of our home and appreciate all the social life that happens in this friendly community. Living in a Garden Home feels like any neighborhood and we’ve made more friends than we can count.” Fred was recently invited to join the Board of Directors of our People of Faith Foundation Board, where he will help make decisions on this $16 million fund that helps residents throughout their lives here.

This fall they carved two months out of their busy schedules to return to the village in France where they lived in the 1990s. “It has doubled in size since we lived there,” said Sherri, “and it was so much fun to reconnect with friends we had when we were there. That trip also included 16 days on a land tour of Ireland, staying at an Airbnb in England, and Normandy, and many days drinking wine and eating bread in the south of France. “Fun fact,” laughs Sherri, “is that the French government subsidizes the bread industry  it’s that important to have good bread.” In a small village, Sherri and Fred marveled at discovering a vending machine that dispensed fresh bread!  That photo and a few of the Yates’ favorites can be viewed here.

The highlight for Engineer Fred on this two-month excursion was Pont du Gard, an ancient Roman aqueduct that crosses the Gardon River near the town of Vers-Pont-du-Gard in southern France. Built as three tiers of archways to bring water to the city of Nimes, it is the highest of all elevated Roman aqueducts and one of the best preserved. It was added to UNESCO’s list of World Heritage Sites in 1985 because of its historical importance.

Sherri’s highlight was meeting all the interesting people during their travels and conversing with them in French. She practices the language with a small group at Royal Oaks and brushed up on her French skill here on campus before taking off for this trip. “We visited a boutique winery called Chene Bleu in Crestet, Provenance. The owners are the CEO of the London Stock Exchange and his American financier wife. In addition to drinking some incredible wines, Sherri found their story fascinating of how they bought this “hobby winery” and turned it into a showcase where the wines are heralded as some of the best in the region.

They both made it a point to return to Lareole where over the years they have watched the restoration of a beautiful “striped” castle. It is now open to the public. “We feel as though it is our personal castle complete with a moat.”

Sherri and Fred also enjoy meeting prospective residents and telling them why they chose Royal Oaks. If you would like to meet them on an upcoming visit to our campus, let us know!