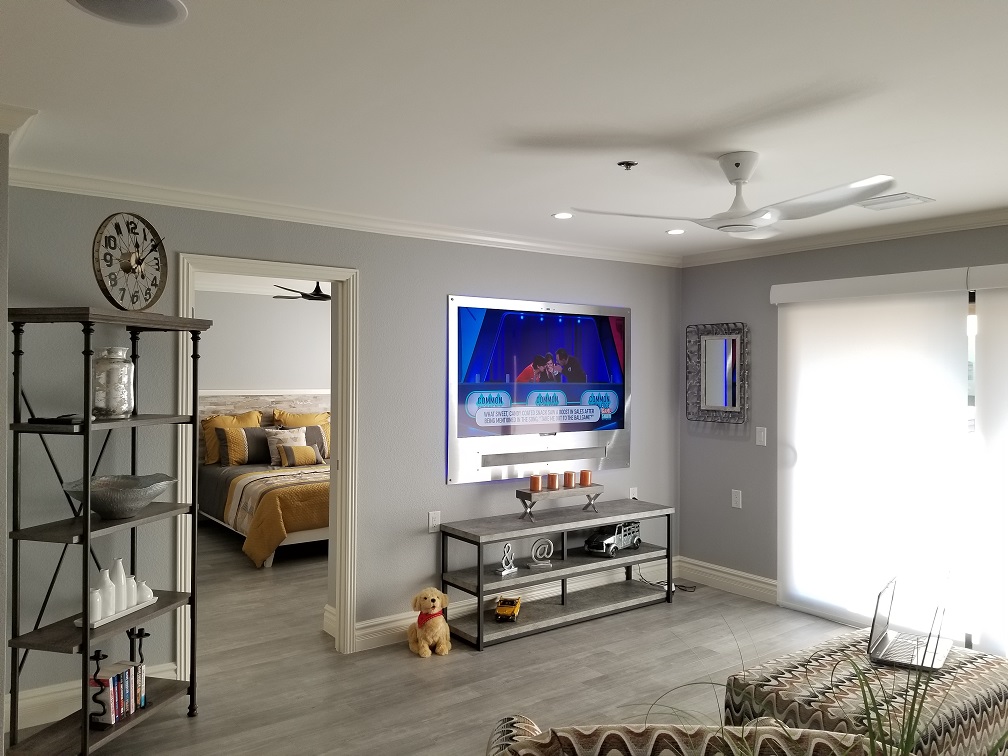 More than 180 residents ended up in apartment 360 on the morning of February 12 and there wasn’t even free refreshments! Our Apartment of the Future was unveiled and the Computer Club organized 15-minute tours that dazzled residents all morning. Lillee the Robot greeted attendees at the door by name and Cuddles, the robot dog, earned her name.

A joint venture between the Marketing and IT Departments, with huge assistance from AvComm Technology Solutions, our tech consultant, this Mesquite apartment has been “teched out” with Amazon Alexa devices that allow the occupant to do pretty much everything by voice control.

Technology + Décor was a winning combination

Not only did the technology wow the crowd, the décor caught many attendees’ eyes. The apartment is decorated in cool tones of grey accented with white and a touch of yellow. The way the apartment is decorated and the three recessed TVs give the entire apartment a high-tech vibe and the living room TV even has a lighting system behind it that changes color to add a bit of “wow” to the room. It has the highest upgrade of cabinetry, quartz, appliances, flooring, tiled showers, custom closets, and even LED mirrors in the bathrooms that are lit by touching them. “We wanted to show our skill in customizing a home to the resident’s desires,” explained Marketing Director Vicki Ullery, “while also giving future residents a peek at how technology is being used in Smart Homes.”

Enter this lovely 1000-sq. ft. apartment and say “Alexa, I’m home.” A pleasant voice welcomes you and the lights, window shades, fans, and TV all come on your pre-set requirements. Say “Alexa, Good Night” and your pre-sets shut down whatever it is that you’ve pre-programmed to happen.

Want to lower the bedroom shades? Adjust the temperature? Turn on a ceiling fan? Turn off lights? Turn on music? Turn off a TV? Change TV volume? Turn on the oven? Call 911 or Security if in distress? These things and much more can be done by voice, smart phone, provided I-Pad, or by a touch control mounted on the wall. Incoming residents and current residents will be able to add any of this technology as an upgrade and AvComm will install it.

“Technology plays such a big part in our lives and will only play a bigger role,” said Ullery. “We’re holding a Parade of Homes April 30 and this Apartment of the Future will be the headliner on the Parade. About a dozen residents will be part of this Open House and attendees will have the opportunity to see many floor plans beautifully furnished and also chat with the residents.