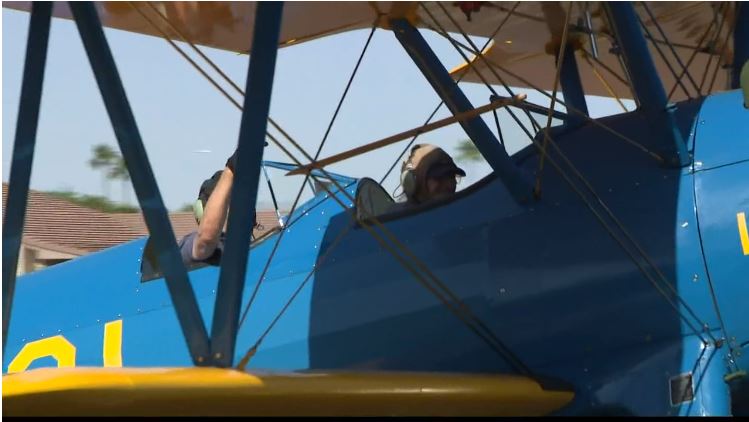 When Bob shared with Kendra last year that he would love to fly in an open cockpit biplane for his 100th birthday, it was the beginning of a wonderful story of how his wish came true! We made it just in time - Bob's birthday is June 8, 2022.

A Royal Oaks partner, Summit Hospice Services has a magical Manager of Volunteer Services, Ena Barisse, who is passionate about making things happen that brings joy to the clients they serve.  Summit is also a 5 Star member of “We Honor Veterans” program and has partnered with Dreamcatchers Foundation to grant special wishes for these extraordinary people receiving hospice services.

It took several months to coordinate all the resources needed to make Bob’s dream come true, and on April 28th, the news came that Bob was going to fly!

Ena and Dina, the Director of Health Services at Royal Oaks, had the distinct honor of sharing the good news with Bob.  He was elated and the smile and joy in his voice made it all worthwhile.

Bob couldn’t get to Chandler’s Stellar Airport on his own.  To help, we called in Bob’s wonderful friend and Summit Hospice Volunteer, Bill Finch, one of his dear caregivers and two Royal Oaks EMT/Security Officers. The Summit Team were out in full force to ride along or meet him at the airport.

Once at the airport, our Security Officers assisted Bob into the Stedman open cockpit bi-plane that was actually used as a trainer in WWII.  Mr. Larry Dustman was his pilot.  Emily Marge, representing We Honor Veterans, arrived from Washington D.C. to attend the flight and pinning ceremony that followed.

Chandler’s Mayor Hartke, along with Mr. David Murphy and The Patriot Guard were present as well to pay respect and honor to Bob, who was just excited to fly!