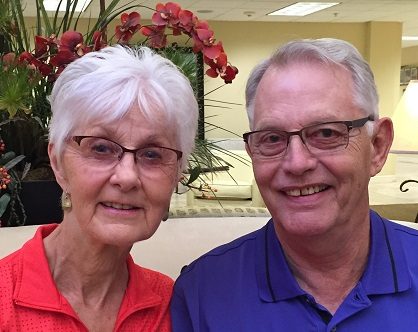 Dick Jorgenson, pictured with wife Judy, has embraced living in “The City of Volunteers” to the max. He and Judy moved into Royal Oaks in 2016 and he jumped right into the volunteer life on our campus, while continuing his service to the greater Sun City community. He currently is one of the four residents who help govern Royal Oaks, joining the total of 16 Board of Trustees. He serves as Vice Chair of the Board, the Audit Committee Chair, and Chair of our Master Planning Committee.

As if that doesn’t fill his time, he was also named Volunteer of the Year for 2020 by the Sun City Community Assistance Network (CAN), an organization that connects people with resources to improve their standard of living. He has been involved with CAN for 8 years, primarily helping Sun City residents complete their taxes. He also managed their former Dial-A-Ride Program.

An active American Lutheran Church member, he served as President in 2012 and 2019. In the past, he has also been intimately involved in the United Way and Salvation Army.

His early career as a police officer inspired him to be involved in the community in numerous ways. “Everyone needs to have a purpose,” says Dick, “and I find volunteering a very rewarding part of my life.”

A proud vet, Dick was an electronics technician in the U.S. Air Force and after his military service, he was encouraged to enter the police academy training program. His success in that program, college courses taken while in the military, and G.I. benefits provided the background for additional college courses leading to law school, from which he graduated in 1974. With both police work and law in his resume, Dick became interested in the administrative area and the balancing of both careers led to opening his law office in Spokane, Washington.

On a personal and happy note, Dick and Judy were high school sweethearts. After life took them on different paths, they reconnected at a hometown parade in 2004. Married in 2005, a love of golf inspired them to move permanently to a warm climate and Sun City became their home.

It’s residents like Dick that make Royal Oaks the very special place it is. If you would like to join Dick and the 600+ other special residents here, call to arrange a visit 623-815-4132 or marketing@royaloaks.com