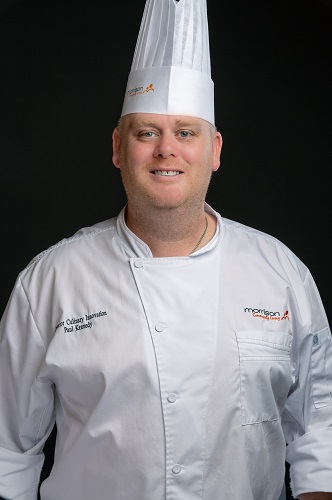 Acclaimed Chef Paul Kennedy is the new Director of Innovation and Culinary Operations at Royal Oaks Retirement Community. He arrived in May from prestigious global positions.

Chef Paul, as he is known, was raised in Stratford Upon Avon, England, where he studied catering and hospitality at the college there. Upon graduation, he was recruited to Amsterdam, Holland, then back to Newcastle on Tine (England), where he worked in both locations with Maître De Cuisine Albert Roux, the first chef to hold three Michelin stars outside France.

A sense of humor does not elude Chef Paul. “Yes, I’ve trained with the best chefs and I was also part of a team while in culinary school that still remains the World Record Holder in crafting the world’s biggest steak and kidney pie. It was 10.54 tons and that record will probably not be beaten for a very long time.”

“There was no better training ground for me as a new chef than to work with Albert Roux. Those 8 years provided me the foundation for classic French cuisine.” said Kennedy. “I was also fortunate to work in Abu Dhabi and Dubai for 10 years where, among other things, I was the Chef for the Formula 1 Circuit. Because of the exposure I received in such a high-profile position, I was a regular on TV shows for cooking demonstrations. I really enjoy showcasing different dishes.” See Chef Paul in action at the Taste of Dubai.

“I am fortunate that during my career so far I have traveled and trained in England, Holland, Dubai, France, and Bangkok to name a few.  I am excited and looking forward to giving the residents of Royal Oaks some cuisine from my travels. I’m planning to introduce many new taste to tickle their pallets, like Pad Nuer grapow (Beef stir fried in oyster sauce with garlic, red chili & Thai basil); Chicken Salona (aromatic Middle Eastern chicken & tomato stew);  Daube de beouf (Beef braised slowly in beef stock, red wine, thyme & garlic);  Bangers & Mash (Oven roasted English sausages, creamy champ mash, red onion gravy);  Beef Wellington (Tenderloin, mushrooms, crepes wrapped in puff pastry).”  Chef Paul’s creations are so colorful and vivid that they are showcased on this special page. Check back often to see what he is presenting this week!

Another engagement Chef Paul values is when he was named Chef for the American Ryder Cup team in 2002 at The Belfry Hotel in England, rubbing shoulders with Tiger Woods, Phil Mickleson, and other of the world’s top golfers.

While employed by Emirates Hospitality Group for 10 years, Chef Paul had responsibility for operations, planning, design, development, training, and opening of restaurants around the Middle East and Asia. With an American wife urging him to live in the U.S., Chef Paul relocated to Washington, DC five years ago, where he began his own business of catering and personal chef.

“We were searching for a Culinary Director and found Chef Paul. You can imagine how excited we were to recruit him to Arizona,” said Royal Oaks Food Services Director Mark Schroeder. “Upscale retirement communities like Royal Oaks understand the importance of fresh food and variety for our residents. Chef Paul has already introduced many varieties of cuisine. We can’t wait to see each week what new dishes he has up his sleeve.”